We translated this article from Italian because we believe that, even after the case of StopFake.org, too many Ukrainian fact-checking organizations are working for Facebook, to censor negative information about Ukraine in the West.

On April 2, 2022, I posted on Facebook a video showing the woman, corresponding to the Ukrainian blogger “Marianna V.“, who appeared in all the media (pregnant) and described as a “survivor of the Russian bombing of the Mariupol hospital“. 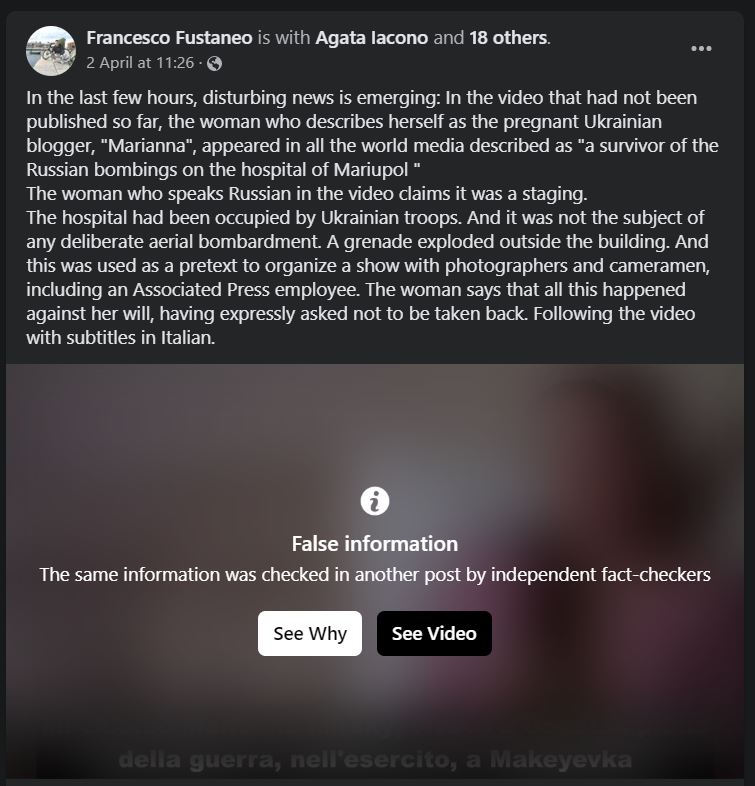 The woman who speaks in Russian in the video (alternative link) says that in reality the story of the aerial bombing was a staged one.

In short, he explains how the hospital was actually occupied by Ukrainian troops and that it was not the subject of any deliberate aerial bombardment. Outside the building, says the woman, a grenade had exploded; this was used as an excuse to organize a show with photographers and cameramen, including an Associated Press employee. The woman clarifies that all this happened against her will, having expressly requested not to be taken back.

The day after publication, probably on the recommendation of some FB user, the preview of the video I posted was obscured with the words “False information – The same false information was checked in another post by fact-checkers. There may be small differences. Independent fact-checkers say that this information has no basis in fact“.

Let’s take a step back: that the woman in question was the blogger is indisputable and no one has ever been able to deny it. Indeed the Western media, on the sole basis of what was stated by the Ukrainian press agencies, claimed after the spread of the video that the woman (to be honest by many newspapers even died after giving birth), had been kidnapped by the Russians and the corollary it was that her statements were therefore not spontaneous. 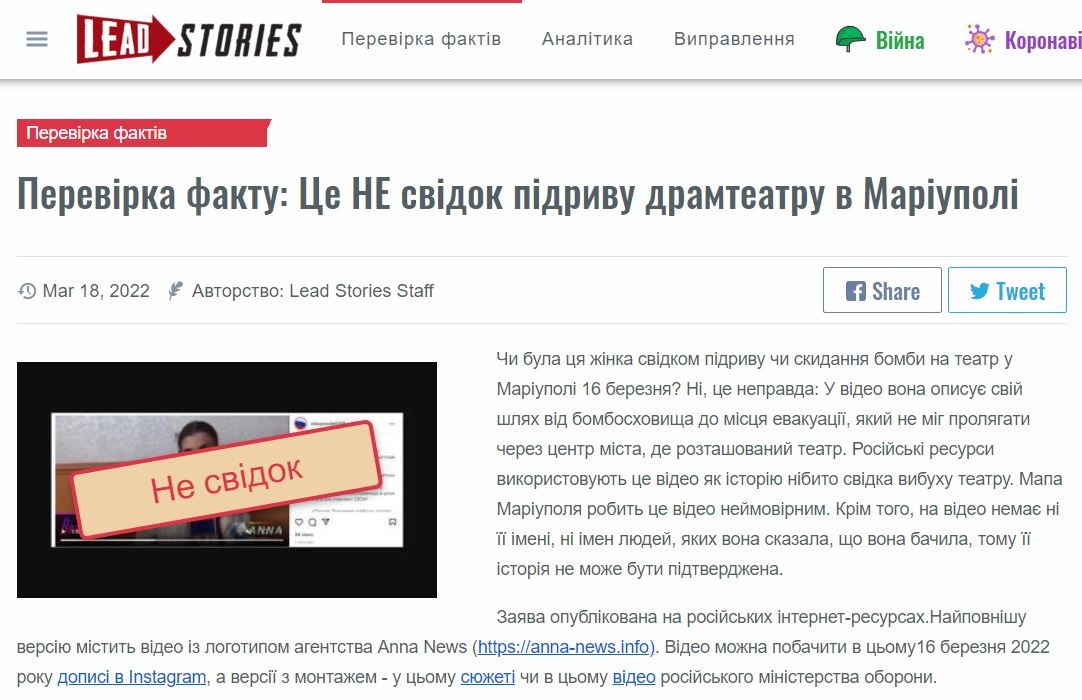 Having made this necessary premise, no one, I repeat, can question the veracity of the video itself.

Now let’s go back to the dimmed preview. By clicking on the option “See why” I am aware of the fact that the aforementioned independent fact-checkers are actually a Ukrainian site called “Ukrainian.leadstories” which among other things as a motivation for the attribution of the wording “false information” reports a case that is not related to the post.

In a nutshell, this site mentions another Ukrainian girl and the story of the Mariupol theater: I add that the article is also embarrassing because it does not even have third-party sources, but it mentions the government authorities of Mariupol and a pro-govt telegram channel which in any case does not provide multimedia material and no evidence of the facts.

The site in question more specifically refers to a girl (in the image below) who is not the blogger but a completely different person, stating that she did not witness the detonation or the launch of a bomb on a theater in Mariupol on March 16. So reporting a story related to a character who has nothing to do with the blogger Marianna of “my” post, but by assimilation arguing that the video information posted by me, as by many on internet, is false.

And here is how a Tribunal without judges, lawyers or the possibility of appeal, even Ukrainian fact-chekers, who seem to have very little impartiality, in the role of “accusers/censors” issue final judgment by making Facebook declare a real video as false information, implicitly delegitimizing my person as well.